Rainforests in Sri Lanka play a major role in regulating climatic conditions of the island nation, removing harmful greenhouse gases and ensuring adequate rain that feed the streams, rivers and over 400 recorded waterfalls. According to climate scientists “Tropical forests, particularly the undisturbed moist and rain forests, play an important role as carbon sinks in the global carbon cycle. These forests store about 46% of the world’s living terrestrial carbon pool and about 11.55% of the world’s soil carbon pool.”1 Therefore, any response to climate change must recognize the role of rainforests in mitigating emissions.
Rainforests are also among the most readily available and cost-effective tools for adapting to a changing climate as they provide critical ecosystem services, such climate-resilient food sources and buffering of severe weather impacts.

Despite the leaders of Sri Lanka pledging to reduce deforestation during the climate summit, rainforests in Sri Lanka continue to be destroyed at an alarming rate. The newest threat coming in the form of hundreds of mini-hydro projects currently in construction with government approval within protected reserves and environmentally sensitive highly biodiverse catchment areas. Each mini-hydro project constructed within protected rainforests destroy hundreds of mature canopy trees such as Hora (Dipterocarpus Zeylanicus) to give way for penstock (concrete channel) from weir to the powerhouse that stretch for several kilometers. Further clearings take place at the site of the powerhouse, forebay, buildings constructed as labor quarters and roads built as access paths. The loss of forest watersheds and overall disruption of the hydrological flow which regulate the forests and its functions can exacerbate the current climate situation. This could further increase the frequency and intensity of natural hazards in the near future. Details of some of these projects and their environmental impact are given below.

Koskulana river forms the northern boundary of Sinharaja World Heritage Rainforest. This 0.6 MW mini-hydro project approved by Central Environmental Authority and Forest Conservation Department directly affects 0.5 km stretch of Koskulana river which will run dry due to the weir and intake of water for the project. Many fish species which live in the river such as Long Finned Eel, Giant Danio, Carveri Rasbora, Stone Sucker and Mahseer may go locally extinct due to this project. Further, the penstock, powerhouse, workers quarters, bungalow and access road has been built within the buffer zone per 2013 UNESCO Sinharaja WHS map. During construction, many giant endemic and endangered rainforest trees such as Hora (Dipterocarpus Zeylanicus) have been cut down within the buffer zone.

Anda Dola is a tributary of Gin river, one of the major rivers in southern Sri Lanka. This 0.7 MW mini-hydro project consists of a weir constructed at Anda Dola within Dellawa rainforest which is ecologically part of Sinharaja Rainforest Complex. Additionally, 2.5 km section of the penstock (concrete channel) has been constructed within the protected rainforest reserve. Similar to Koskulana mini-hydro project, this has also been approved by Central Environmental Authority and Forest Conservation Department violating the National Environmental Act and Forest Ordinance. Many mature endemic and endangered trees such as Hora (Dipterocarpus Zeylanicus), Thiniya Dun (Shorea trapezifolia) and Yakahalu (Shorea dyeri) have been cut down during construction at the weir and along penstock to the powerhouse. Many of these endemic trees in the region are listed in the IUCN red-list of endangered species and in danger of going extinct. The mini-hydro project will destroy a total 6.5 km stretch of Anda Dola stream, due to the diversion of water. This will result in local extinction of many endemic and endangered fish species such as the Barred Danio (Devario pathirana) and Ornate Paradisefish (Malpulutta kretseri) which has
been recorded in Anda Dola. 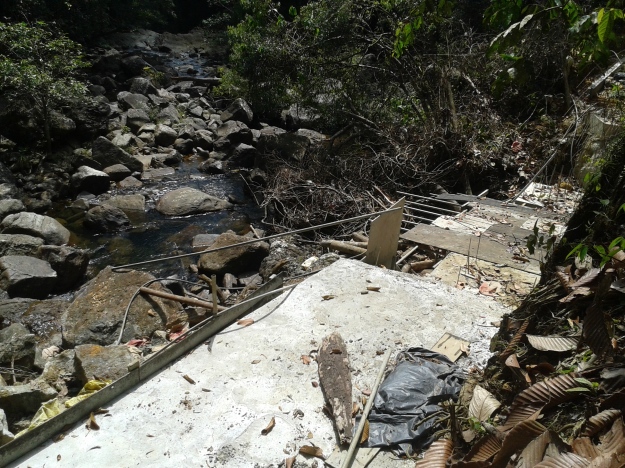 Seven Falls “Eli Hatha” is a picturesque collection of 7 waterfalls within “Sri Pada” Peak Wilderness Sanctuary that is part of UNESCO World Heritage Central Highlands of Sri Lanka. This beautiful rainforest has the richest in biodiversity with the highest number of endemic species in the county. Construction of the weir, four-bay tank, powerhouse and the water transfer tunnels has caused severe damage to this nature reserve and Seven Falls “Eli-hatha” waterfall. The weir has been constructed at the foot of the third waterfall and once the waterway is diverted towards the four-bay tank through the water transfer tunnels, the four remaining waterfalls effectively go dry causing irreparable damage to the ecosystem. In addition, large amount of endemic and endangered trees have being removed to enable the cranes to lift the concrete tunnels from the downhill towards the weir. 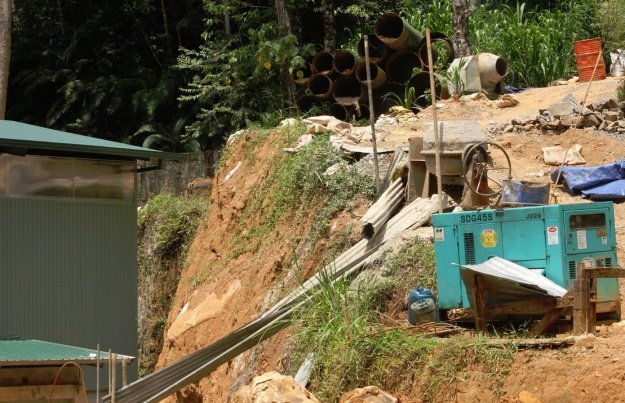 With the continued destruction of rainforests and diminishing groundwater reserves, many of these streams and waterfalls are in danger of completely drying up even during a short dry season which will further reduce the practical capacity of these projects. It is puzzling why Sustainable Energy Authority and Ministry of Power and Energy in Sri Lanka are continuing to push destructive mini-hydro projects within protected rainforest reserves, instead of promoting environmentally friendly and drought tolerant alternatives such as rooftop solar, waste to energy and offshore wind. Ironically, these environmentally destructive mini-hydro projects are carried out using the term “Sustainable Energy” with the backing of Government with assistance from UN, ADB and World Bank. Therefore, we urge you to take immediate corrective action to stop further environmental destruction due to these mini-hydro projects and ensure the national policy on renewable energy focuses on technologies that do not cause ecological destruction to our vital catchment areas and climate resilient rainforests.